We had the good fortune of connecting with Lynda Tyler and we’ve shared our conversation below.

Hi Lynda, what was your thought process behind starting your own business?
Ever start down one path and find yourself in the middle of something wholly unexpected? Then realize it was something you had been preparing your entire life for but just didn’t realize it? That’s me…

This isn’t the first business I have started, just the most expensive. Let me indulge with a bit of background. I graduated high school in 1982, went to college and became a Registered Representative of the New York Stock Exchange following in my father’s footsteps. That was my vocation till 2014 when I became a realtor. That vocation I retired from last week to do this full time. My Avocations was much different. In Kansas I taught etiquette and modeling, directed pageants, hosted large and small social and political events and even studied Law and ballroom dancing. After I moved to Texas in 2012 I went to culinary school and had a catering company for fun. My parents own land and rental houses that I manage.

Several years ago we purchased the farm next to us out of an estate. My husband and I had became good friends with the family that lived there so we teamed up and he stayed on as the caretaker. I pretty much adopted Robert as the brother I never had and he has been a supportive business partner. We remodeled the farmhouse and made major improvements to the property.

Trying to figure out how to make the farm pay we started allowing camping and joined Hipcamp.com. This was a lot of fun having people come and enjoy the land and get their children away from the screens. We needed a name and my stepson had built a gate that we had painted a copper color so we called the place “Coppergate Ranch.”

Because we felt so strongly about getting peoples heads out of their phones, televisions, gaming and into nature, our tag line is “Escape Technology”.

This was all great but we needed more services. Campers wanted flush toilets and showers. So after Christmas 2020 we were walking around trying to figure out where to build a bath house. Then dad said. “would be nice if there was some sort of pavilion or shelter they could gather in. (Dad was thinking big carport at the time.) Then mom chimed in “When we went camping with groups it was so nice to have a kitchen somewhere.” Finally the real opportunity came when dad said “If you will sell that 70 acres over by Daingerfield, you can use the money for improvements here.” He thought I would sell it for what he paid for it of $140,000 but it sold for $260,000 and we were funded….barely.

The land closed on January 6, the building was ordered on January 8 and clearing began on January 12. what nobody expected was that I had designed a 3600 square foot building with 4 bathrooms, commercial kitchen, Bar, Main hall, brides suite and large covered porch and patio off the back. I had remodeling experience and between Robert and myself we did 90% of the finishing above the slab. Including plumbing, electrical, carpentry. My 80 year old father has a sawmill so much of the finish lumber was cut and milled from the property. And we used, reused and repurposed more things than you have time to hear about. The place is cool and full of unique ideas.

Under Build it and they will come we had posted our progress on facebook and our first bride came out in September and booked us for November 20 for her wedding. We weren’t done but we were done enough to pull it off. We have hosted many more weddings, parties, reunions and dinners since then. 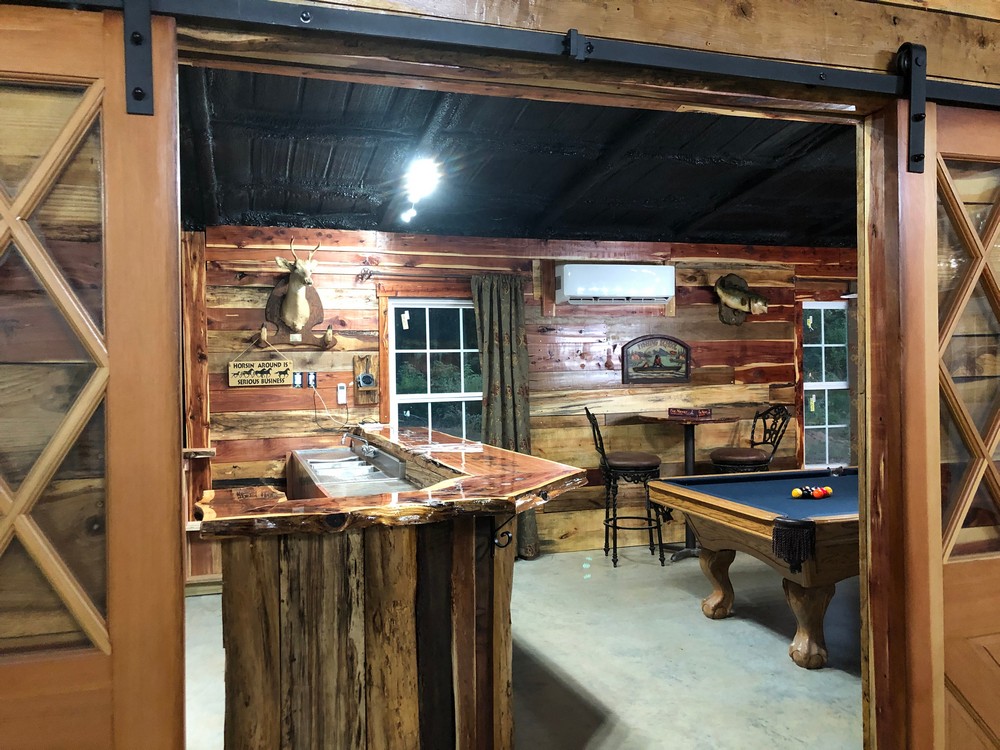 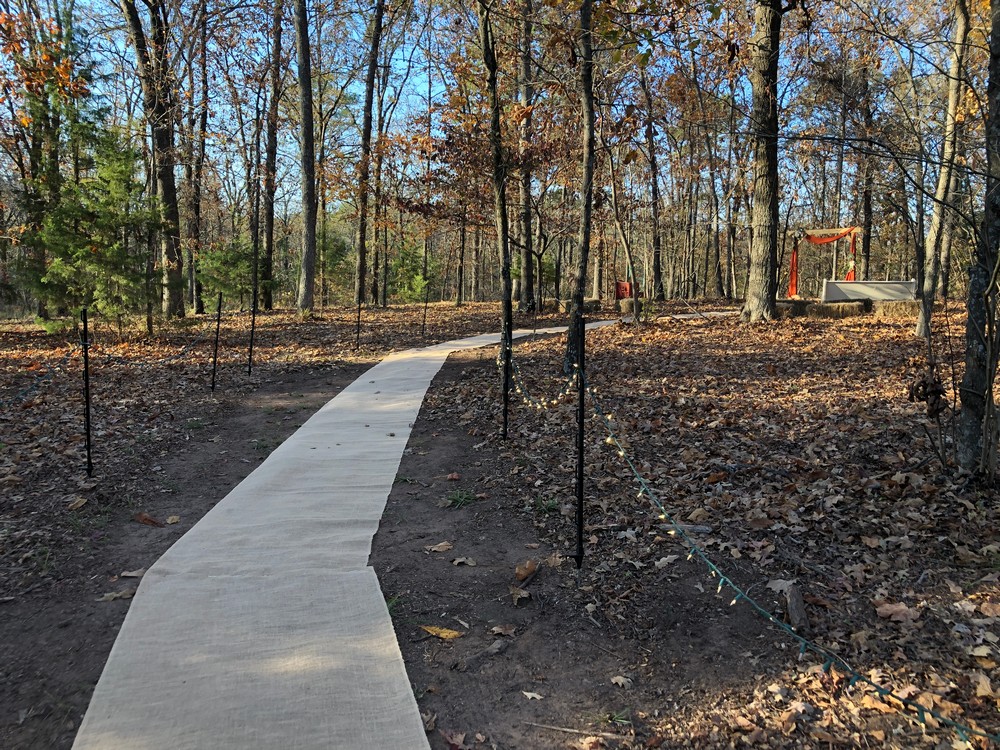 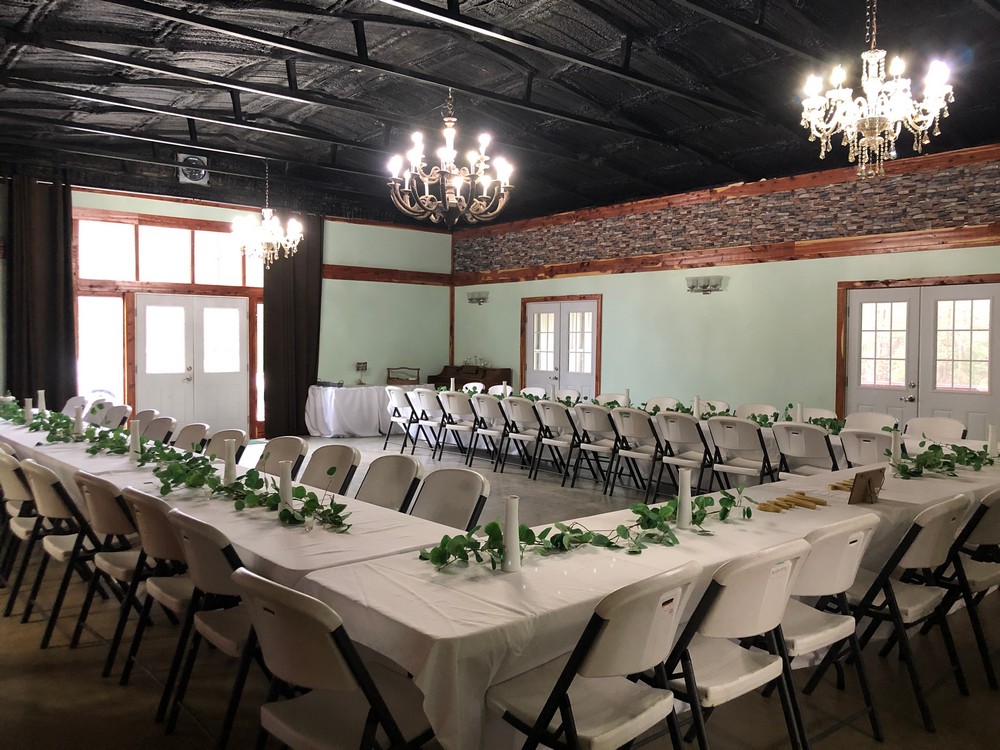 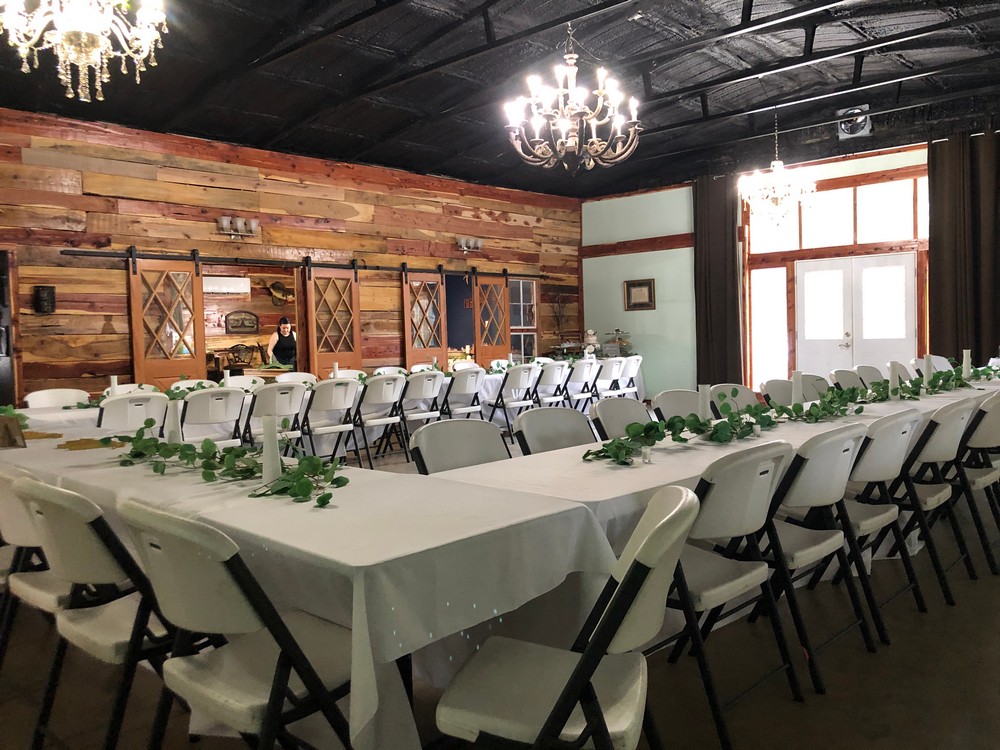 The Club at Coppergate Ranch is a social club with a liquor license.

Our biggest challenges have been Covid, Supply problems, vanishing workers and the government. Most of the time we would concentrate on the solutions. We would reuse and repurpose what we could but a shout out ought to go to our poor UPS Driver because we purchased so many things online he had to deliver.

Thank God for your resources and respect the resources He gives you.

Have a group of trusted friends and family to bounce ideas off of and to get help from.

God will bring people into your world for HIS reasons. We gave opportunities and work to many talented people who would not have passed a background check at a regular business. Some worked out great and some are left to their own destruction but they had a chance and that is all we can do.

We love what we do and it isn’t about the money. (Well…except that property tax bill we have to pay..) We have been outfitting the place so if there is a sweet bride who wouldn’t ordinarily be able to afford a wedding, we can make it beautiful and affordable. But don’t take an attitude, Life is too short to deal with unappreciative people. 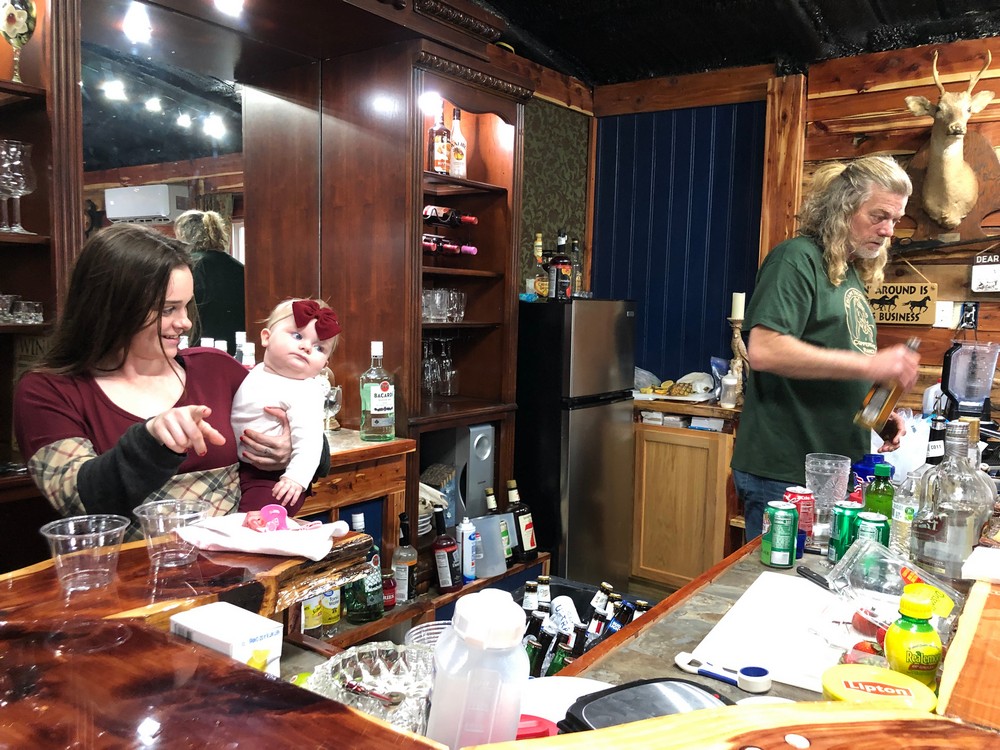 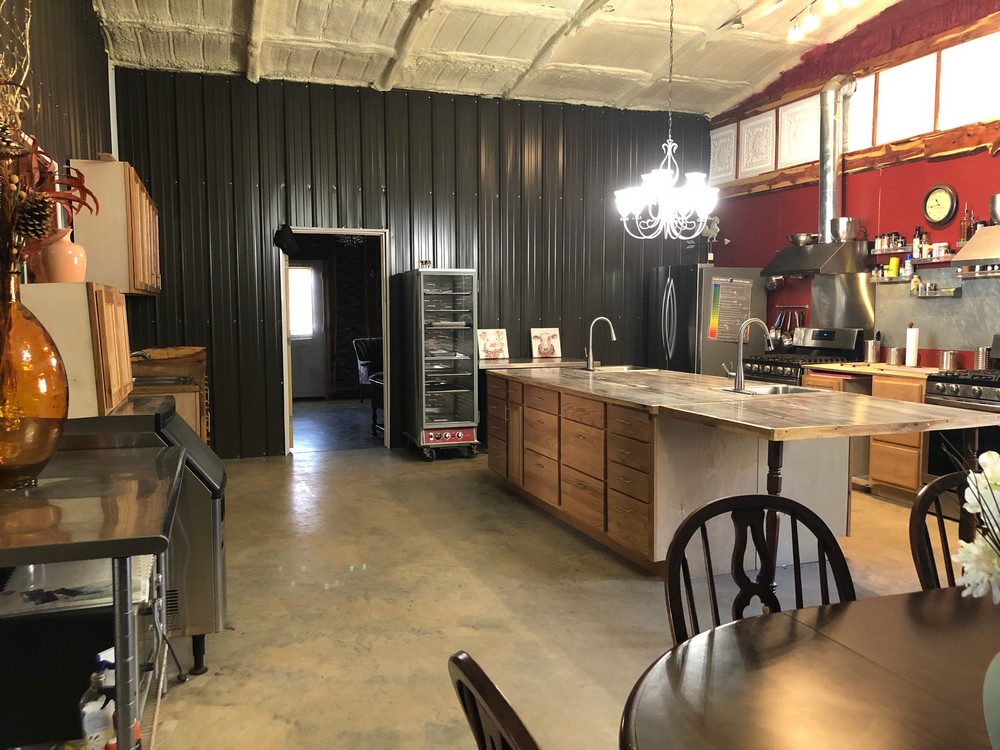 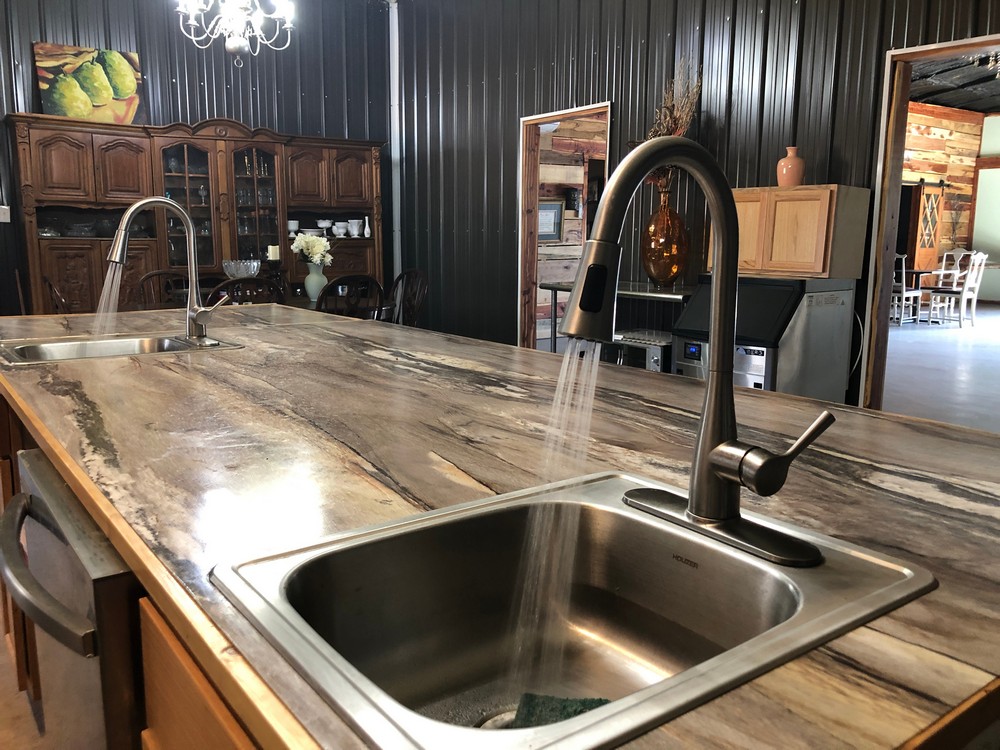 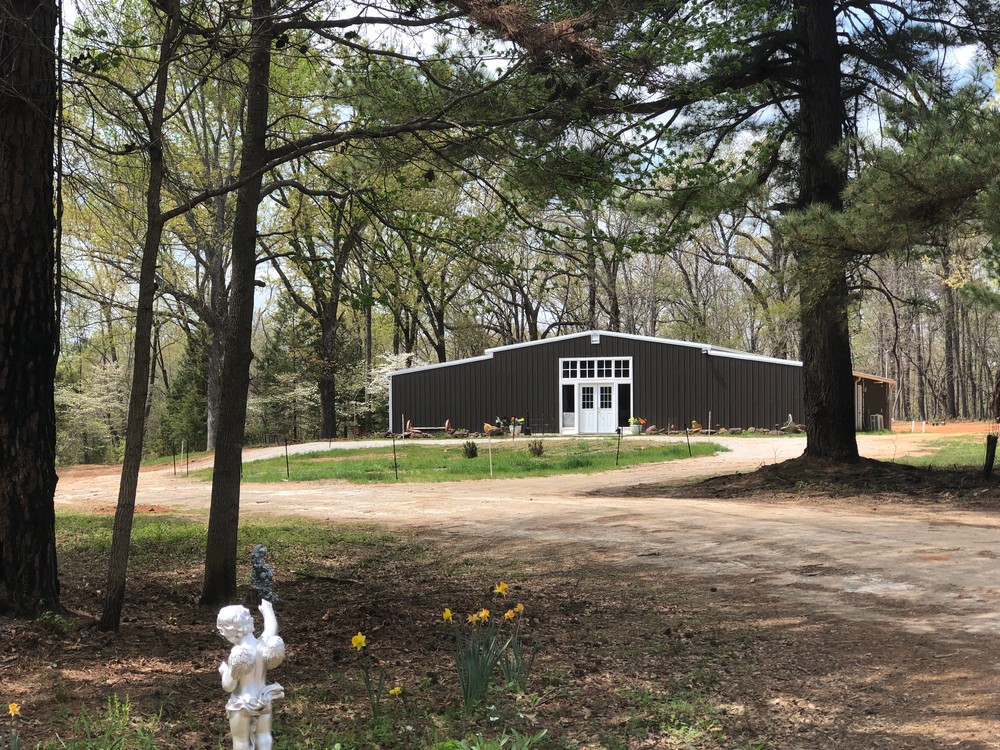 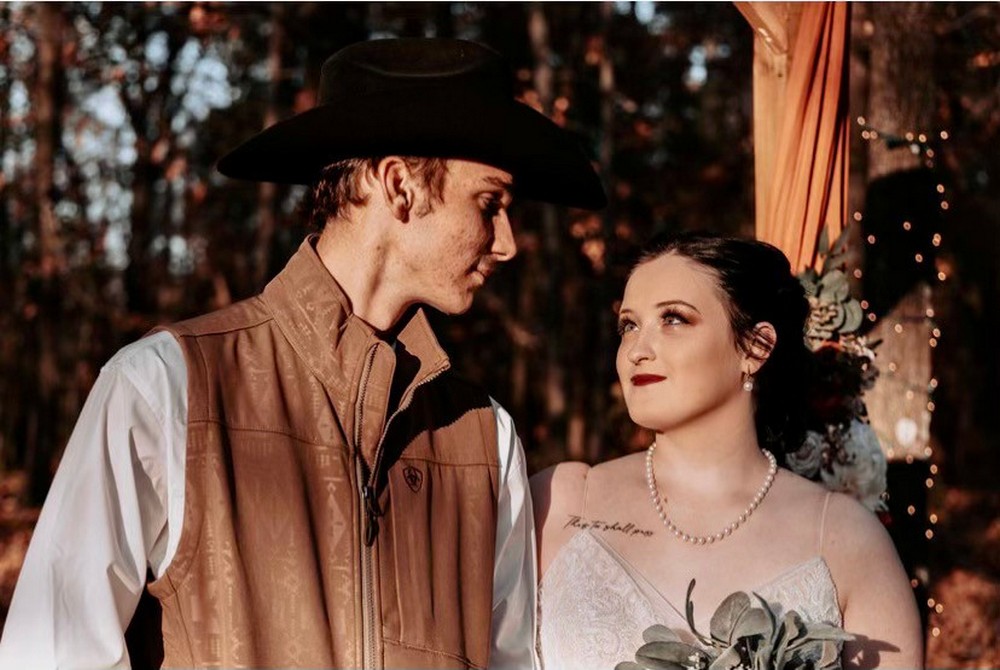 If you had a friend visiting you, what are some of the local spots you’d want to take them around to?
We are closest to Mt Pleasant. A small town in Northeast Texas. Most people come to Coppergate Ranch to escape technology, their work lives, their city lives and want to relax. We would spend time on horseback, walking the trails, seeing what we have done and maybe do some fishing or swimming. Then go into Mt Pleasant or Pittsburg to visit the great antique shops and local shops. There is an amazing privately owned Air Museum, and a candy factory (Sweet Shop USA).

There are three large lakes in the area to go boating on and vineyards to do some wine tastings. Here on the ranch we pride ourselves with fine food, great drinks, and lots of conversation. 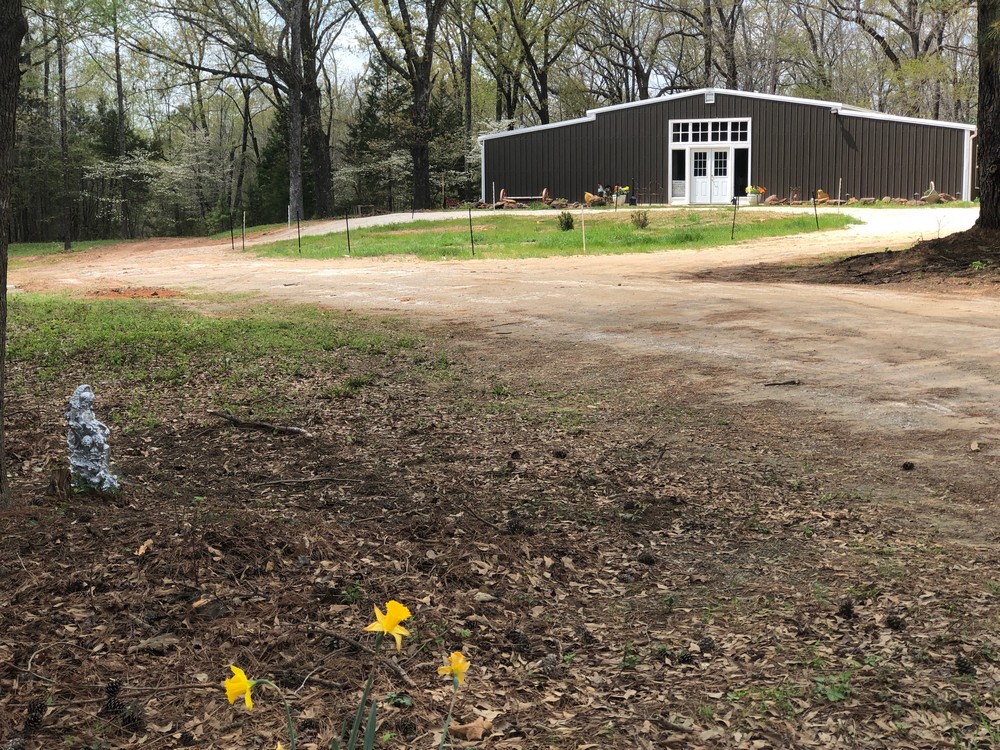 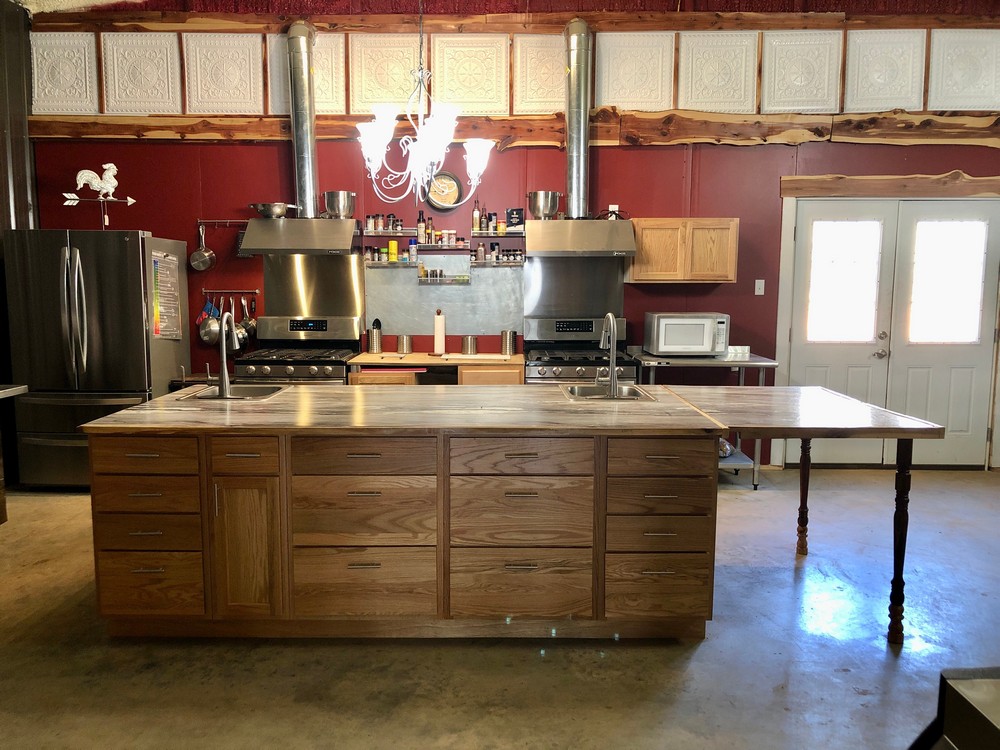 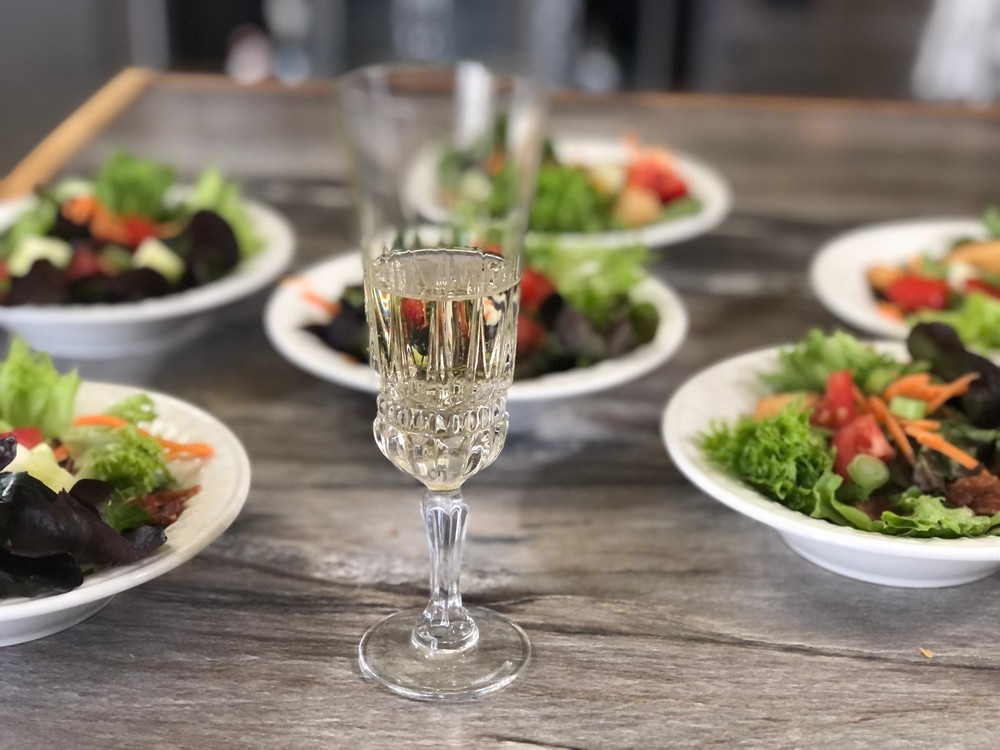 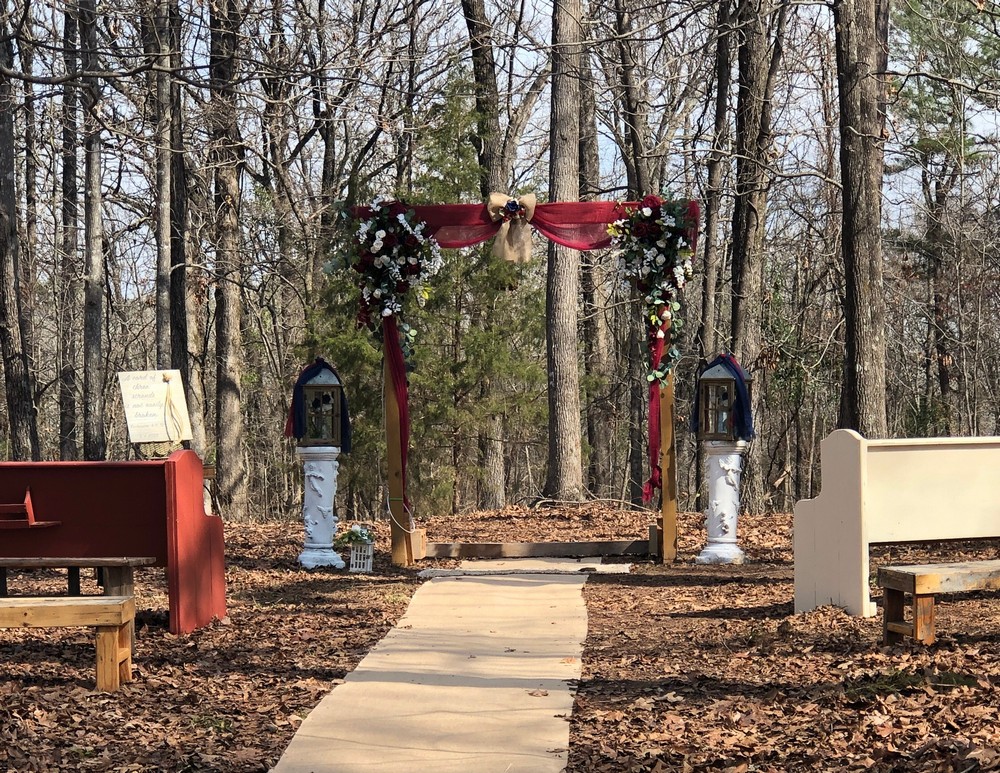 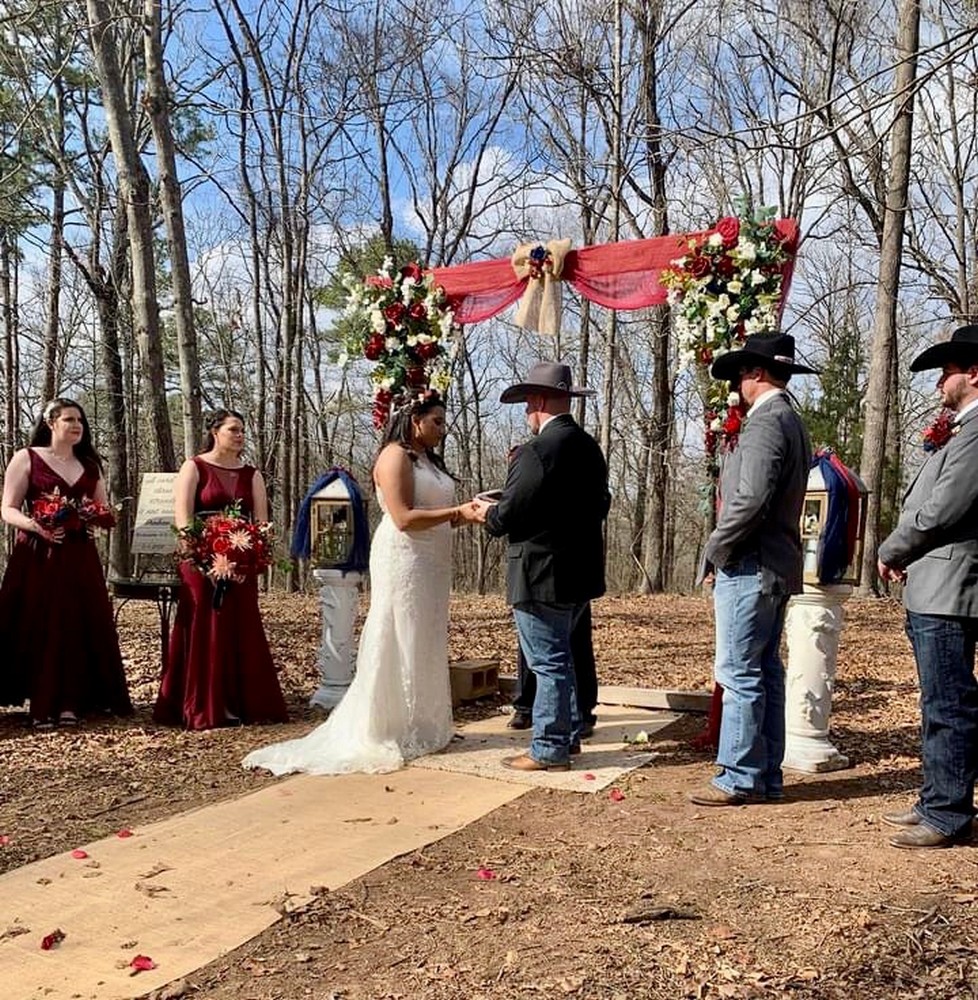 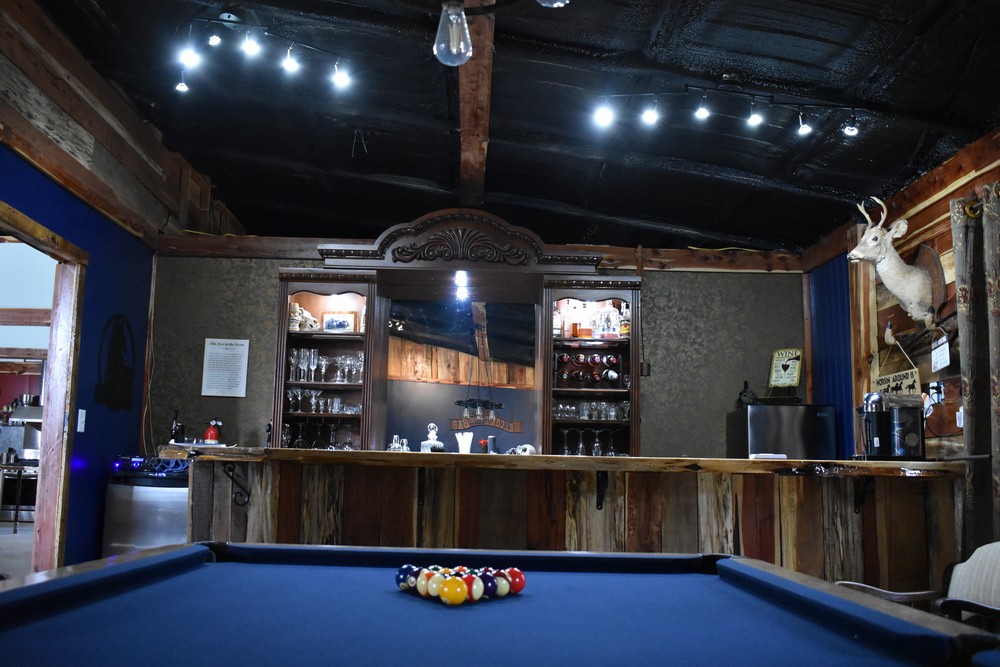 Who else deserves some credit and recognition?
My Two Roberts – My husband Robert “Rob” Tyler and my “brother” Robert Rust.

These kind, tolerant souls have done a lot of heavy lifting, late nights, U tube how to videos and said “you want to do what?” Many times. Robert said this is probably the most complex project that was created being altered each morning based on what materials we had or could find during the Covid shutdowns and supply chain challenges. Few would have tolerated all the unknowns.

Image Credits
First Couple is Riley and Josh Ross taken by Captured by Courtney Photography. Second couple is Kianna and Jason White and their photographer was Carrie Kirkland.