We had the good fortune of connecting with MONNA and we’ve shared our conversation below.

Hi MONNA, is there something you believe many others might not?
I was always told to work within the rules that are presented to me and to find what box I fit in. I think it’s very important to take a step back and recognize that there can always be new rules and there’s nothing stopping any of us from creating new boxes. If you don’t fit into a box, then that should motivate you to create your own. The chances are that if you’re feeling that way then you’re not alone and there are people out there just like you waiting for someone to create a space for them and allow them to feel like they have a box they finally fit into. When someone says no, it’s not rejection as much as it is permission to find a better opportunity. 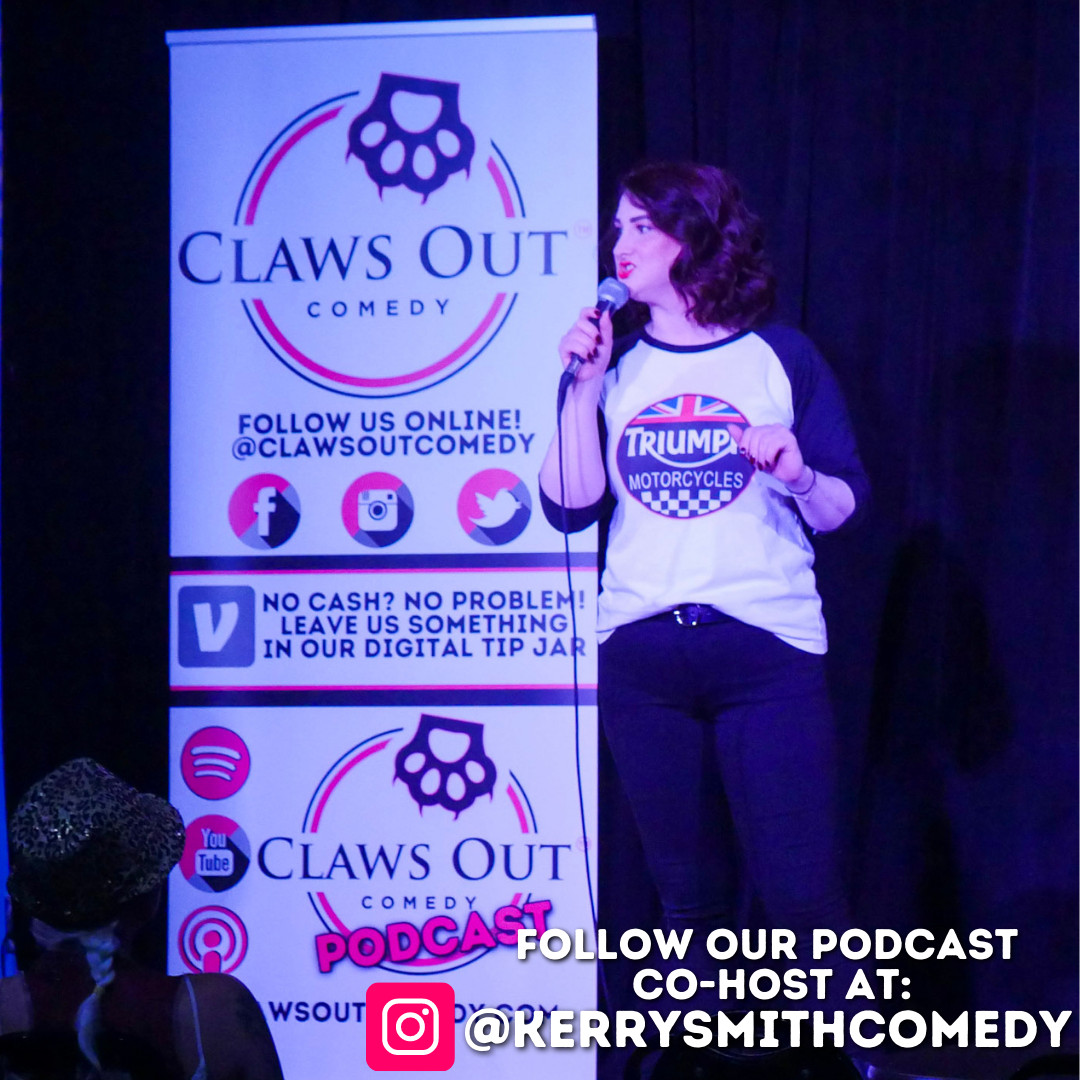 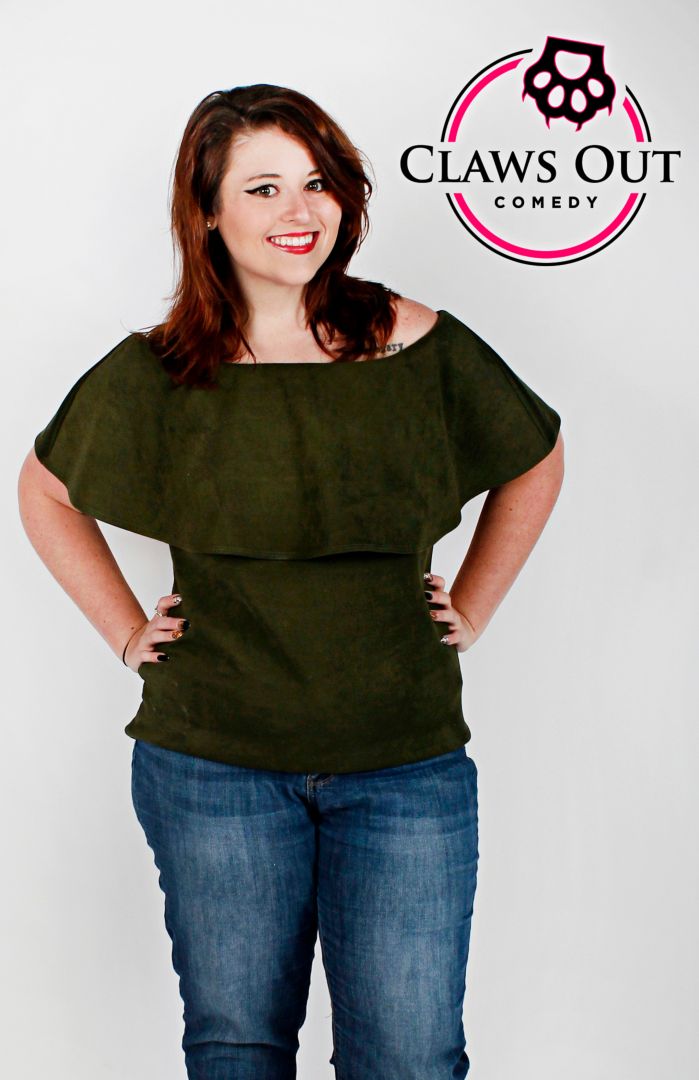 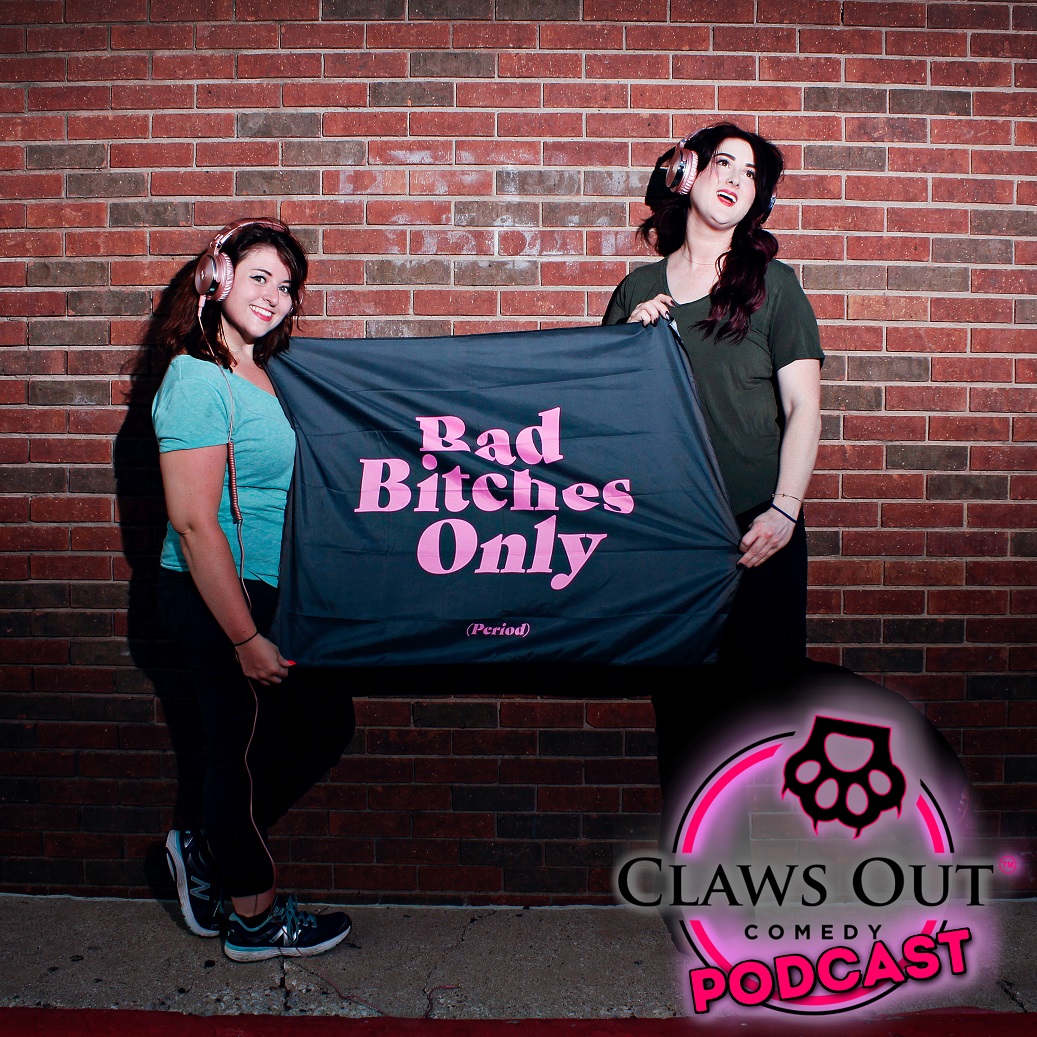 Can you open up a bit about your work and career? We’re big fans and we’d love for our community to learn more about your work.
I’m a stand up comedian. I’m originally from Fort Wayne, Indiana and relocated a few years ago to Fort Worth, TX. I use the platform that I have to try to normalize mental health. I personally live with Bipolar I Disorder and Borderline Personality Disorder so the first comedy album I’m recording on 10/29 is actually called, “UNSTABLE” and gives light to what the struggle with mental health is really like. I believe that stand up comedy is an art form that allows you to take experiences that were traumatic, upsetting or isolating and transform them into something that’s not only a creative expression but something that’s relatable and builds a connection with your audience. At my lowest points, I’ve felt alone. That’s why I focus all of my energy into being vocal and being vulnerable to let anyone who might be listening knows that they are not alone. I started “Claws Out Comedy” because a local club owner asked me to produce a show for his club. I was trying to figure out what kind of a show I might like to run or that DFW might need. I googled one day “Women are funny” and Google said, “Did you mean: women AREN’T funny?” And that’s when I knew that we needed an all female show to start changing that perspective so I started “Claws Out Comedy: the cattiest comedy show in Panther City”. The tagline has faded as we’ve expanded into markets outside of Fort Worth. Claws Out Comedy had our first show 9/28/19 and since then have performed at every major club in the metroplex, at clubs all over the state of Texas and we were even featured on the She-Rock Festival in Denton. The pandemic didn’t slow us down, it forced us to adapt so we now have the “Claws Out Comedy Podcast” in addition to our live shows and we remind everyone every show that “bad bitches can be sad bitches” and do our best to normalize mental health and to encourage people to take care of themselves. There are so many talented women in the comedy community and I’m very proud to have worked with many of them over the past year. Claws Out raises the standard on what an independently produced show looks like and reinforces the undeniable fact that women are funny.

Let’s say your best friend was visiting the area and you wanted to show them the best time ever. Where would you take them? Give us a little itinerary – say it was a week long trip, where would you eat, drink, visit, hang out, etc.
If someone was visiting Fort Worth, I’d have to take them to West Side Cafe for breakfast and then over to Torchy’s for lunch. Visiting the water gardens and Sundance Square would be high on the list. Fort Worth has so many amazing parks and places for shopping, it’s easy to fill up a week with activities and still not have done it all. I can’t drink much anymore but I do still love Twilite Lounge in Fort Worth because of their amazing staff, their unwavering support of the comedy community by letting me host their STFU Open Mic and running Claws Out Comedy shows on their stage and let’s not forget their amazing po’ boys and fried green tomatoes! Funky Picnic also supports our local comedy scene and their amazing owner Samantha Jo Glenn has been setting the bar when it comes to thriving in a pandemic. They’ve adapted better than any business I’ve seen and have been constantly striving to come up with new ideas and ways that their patrons can continue to support them through this difficult year. We actually did a comedy and hip hop show outside in their parking lot this summer! Main at South Side is another great venue if you’re looking for a good time. They run comedy open mics and always have a fun show going on whether it’s comedy or music, you’ll find it there! 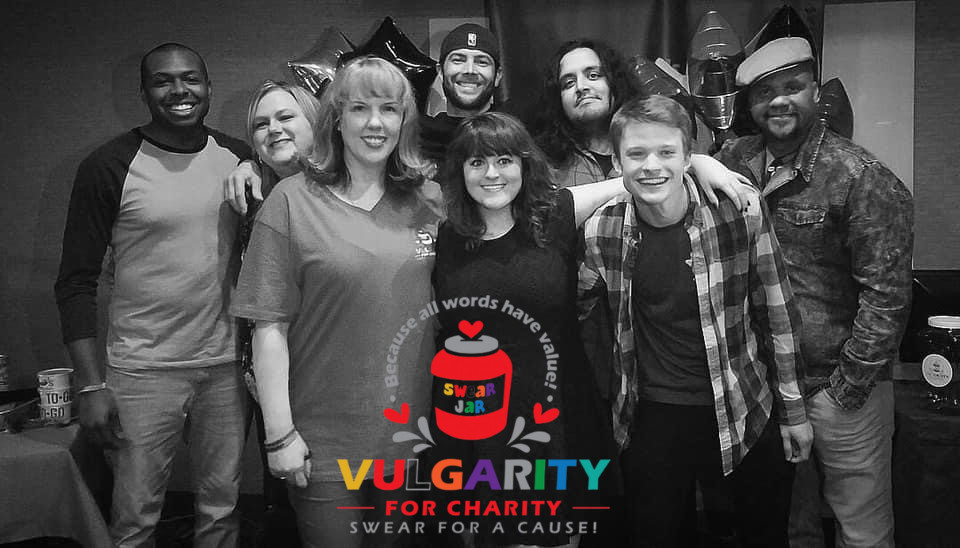 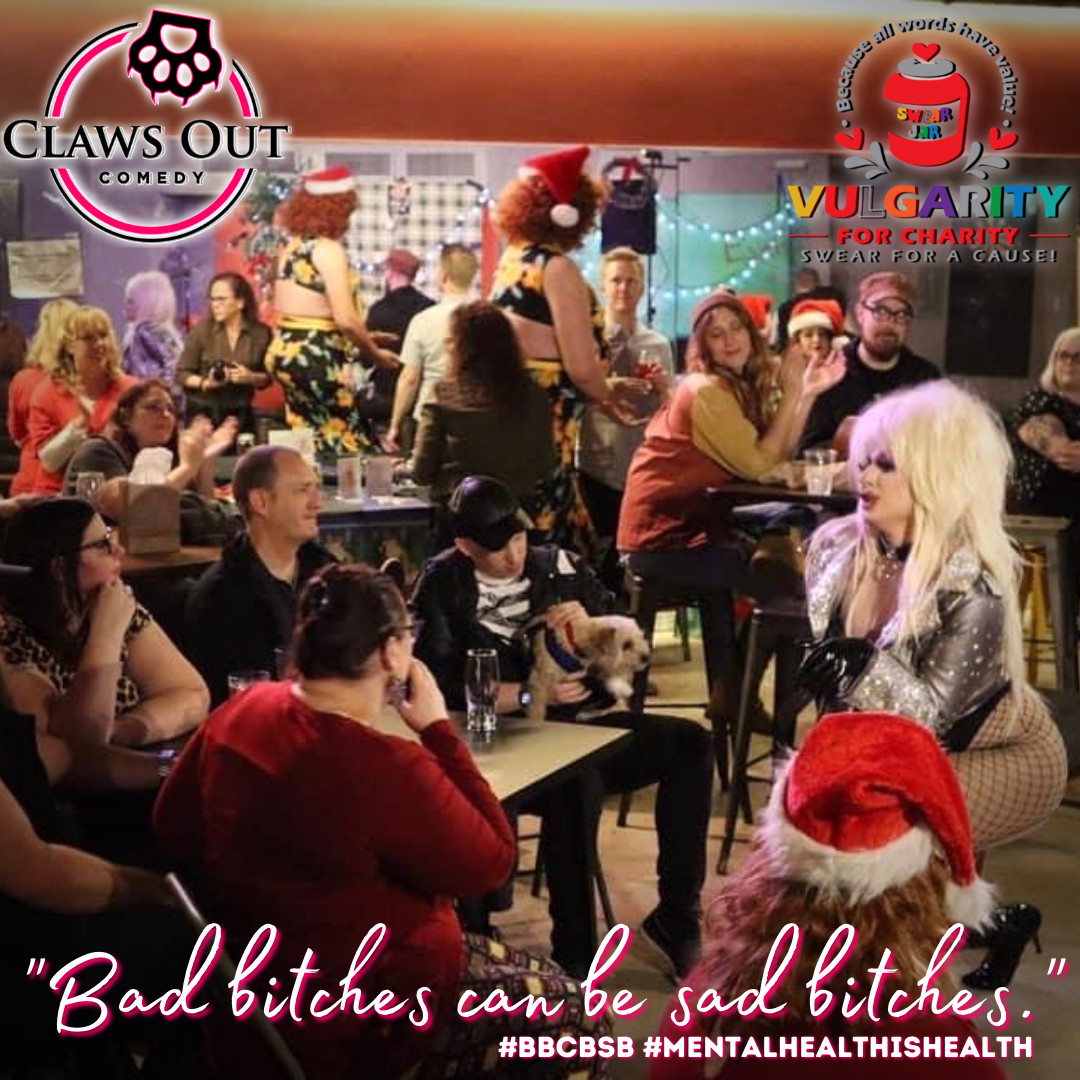 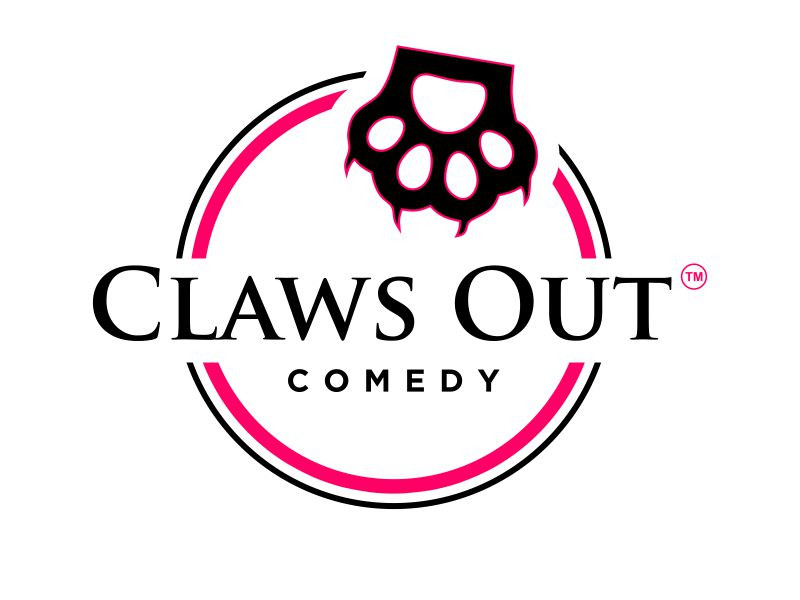 Who else deserves some credit and recognition?
“Vulgarity for Charity” works closely with Claws Out Comedy and our missions are very aligned in the way that we want to normalize mental health and make it more socially acceptable to talk about the ugly sides of life. V4C provides financial assistance to those who have been left behind by loved ones who have committed suicide and I think their mission and the work that they’re doing is very important. A lot of organizations exist to help with suicide prevention but there aren’t many that help directly deal with the aftermath. Firecracker Agency has also been very helpful with establishing the online presence for V4C and for Claws Out Comedy- they currently produce the Claws Out Comedy Podcast available on clawsoutcomedy.com, Spotify and Apple Podcasts.