We had the good fortune of connecting with Charles Hou and we’ve shared our conversation below.

Hi Charles, do you have any habits that you feel contribute to your effectiveness?
When I first entered my school’s Junior State of America meeting as a freshman, I had no idea what to expect. I was told that the organization was similar to speech & debate, which was something I was passionately involved in and still am today. When I first entered the small room tucked away in an obscure hallway, I was welcomed by a unmistakable wave of humidity and a modest group of sophomores wanting to share the club with a new generation of high schoolers. Despite their passion, my school’s chapter was incredibly small. Only three people went to the Fall State Convention, and they were dwarfed by larger chapters in Houston and San Antonio. After the Fall Convention, seeing the small number of students within the club, I could have very easily decided to quit the organization without putting a second thought into it. Yet at a pivotal moment in my high school career, inspired by the photos of my friends who had attended the Fall Convention, I decided to make a trip to Houston for the Spring Convention. There, I was greeted by hundreds of students buzzing with excitement in the large convention halls, ready to share their political opinions and engage in meaningful dialogue. From that point, my passion and dedication to the organization skyrocketed. Over the past two years, I have served as a chapter president rapidly expanding my chapter by over 500%, a leader in the Cabinet as the Director of Debate, and as a simple participant, actively engaging in initiatives to help our communities and share our political opinions. I’ve dedicated countless hours of work to be as successful as I can be and share the beautiful message of JSA to others across the nation. I would have never gotten to the point where I am today without my constant habit of seeking new opportunities. From the very moment I stepped foot into the Junior State of America, I sought new paths of engagement. Going to my first convention, applying to the state cabinet, and running for elected office where all actions I deliberately took to seize opportunities and expand my role in the organization. Far too often, people make their complacency habitual; midway through my freshman year, I felt myself groaning at the prospect going to a chapter meeting. Yet after discovering the vast swaths of students involved in the organization, I changed my habits of laziness to proactivity. Some studies say that breaking a habit takes 21 days. Yet I truly believe it takes just 1 day, or even just 1 action, to break our brain’s pre-wired tendencies. It’s always the first step that’s the most difficult – once you get past it, everything becomes simpler and less daunting. My first step into the humid, dimly lit room of my first JSA meeting paved the way for me to go to my first convention, get my first seat in cabinet, and become a vocal leader within the organization. I hope that a single step can help you break your old habits, develop new passions, and accomplish whatever you wish to achieve. 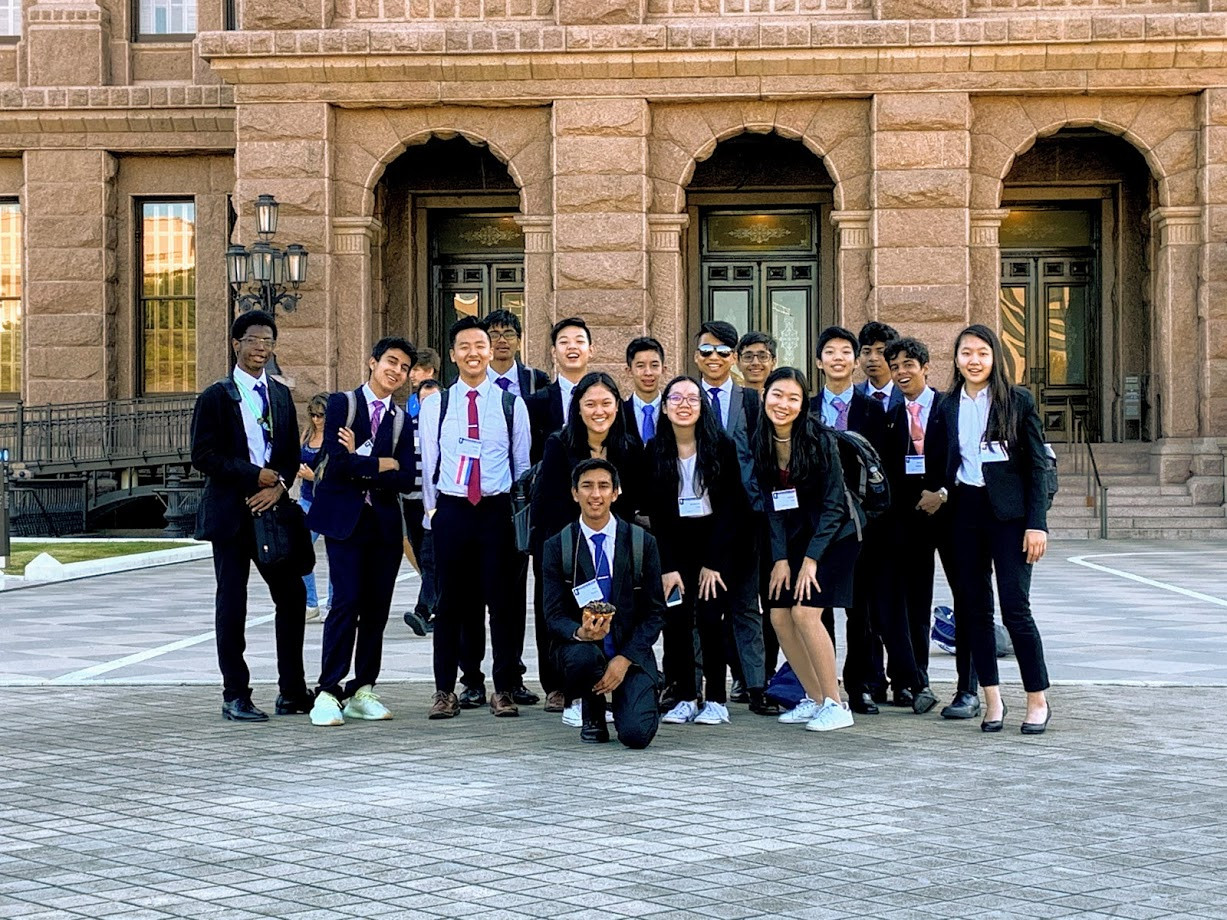 Let’s talk shop? Tell us more about your career, what can you share with our community?
I currently serve as the Director of Debate for the Texas Junior State of America, a nonprofit organization that provides a platform for students to conduct political discourse and activism. Every year, we host several local, state, and national conventions where students can meet like-minded students and debate hot-button issues. I’m proudest of the adaptability of Texas JSA in light of the COVID-19 Pandemic. Texas JSA has always done in-person conventions at Austin or Houston and shifting to an online format completely uprooted and disrupted the JSA environment. At the beginning of the year, we feared that people would lose interest in the organization, as they could no longer meet with their peers face-to-face to discuss their political interests. However, chapters and JSA-ers as a whole have been incredibly diligent, far exceeding my expectations. Thanks to our streamlined transition to Zoom conventions and digital voting platforms like JSAVote.com, I have been able to continue the legacy of JSA debate without many hiccups. Although convention attendance is slightly lower than the years prior, the consistent engagement we have seen throughout the year is inspiring and gives me faith for the future of political discourse in America. I’m the most excited about the future. I have served plenty of time as the Director of Debate, learning the ins-and-outs of the organization that I’ve grown to love. However, I believe there’s so much more I can accomplish outside of Debate. That’s why I’m running for Lieutenant Governor of the Texas State, to expand my role and bring innovation to the organization as I have innovated for Debate. Regardless of the outcome of the upcoming elections, I”m excited to give this organization my all in whatever position I inherit. Ultimately, I want people to see not just my title or position in JSA, but my dedication and trust in the process of political discourse. In a time of rapidly spreading misinformation, propaganda, and hate, JSA gives students like me a chance to remain true to the values of research, fact-based debate, and honesty. As a leader in the debate process, coming up with intelligent topics, devising exciting styles, and simply watching others debate has made me confident that JSA’s impact is going to be one worth remembering. Coming from an environment where clubs like JSA were nearly non-existent, I’ve witnessed firsthand how a passion for discourse can transform a culture. As Director of Debate, I believe that culture shift is applicable outside of the walls of JSA. Everyone, no matter their age, culture, or creed, should reflect and understand the role positive discourse has on our collective understanding. 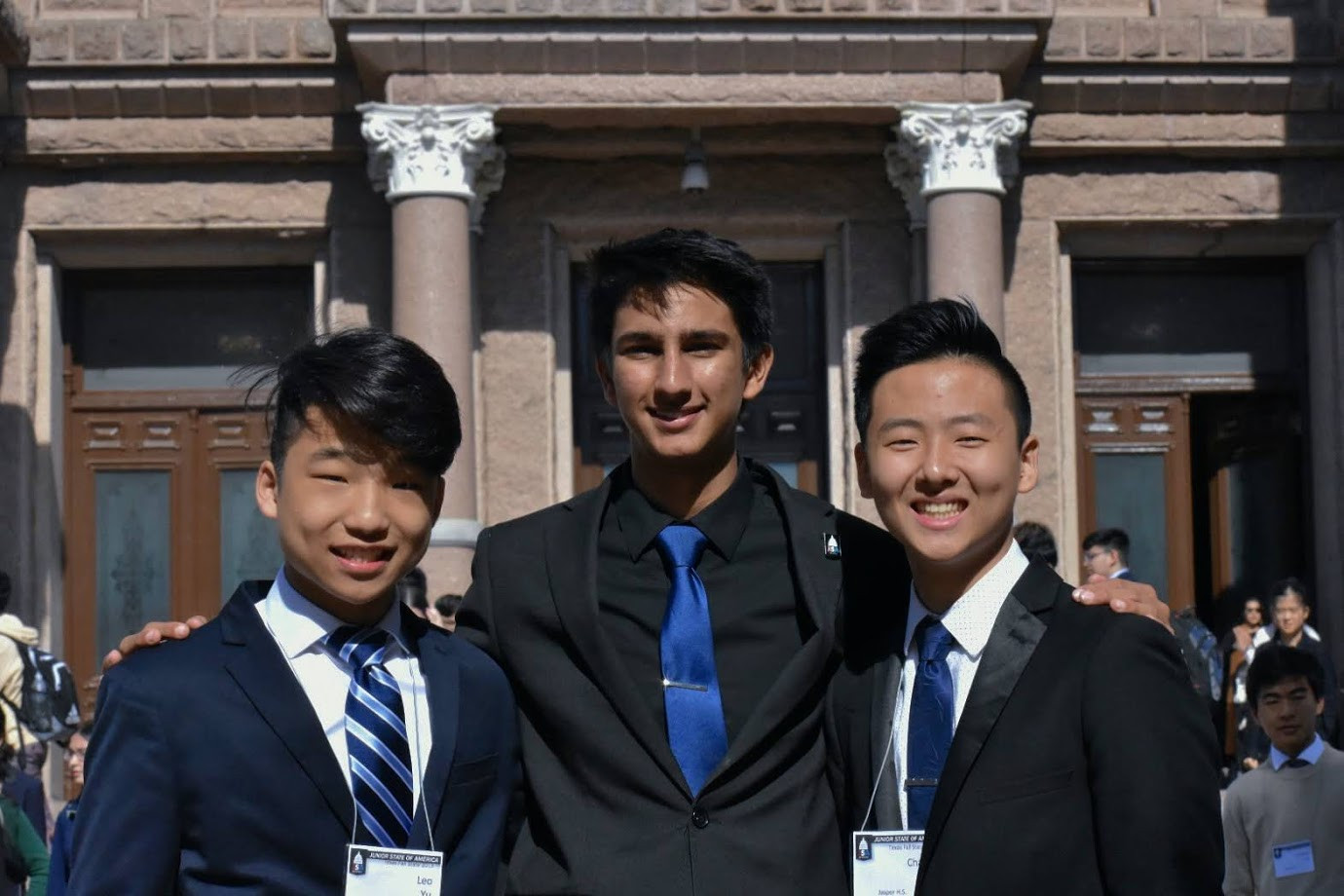 Any places to eat or things to do that you can share with our readers? If they have a friend visiting town, what are some spots they could take them to?
I’d start by taking them to AT&T stadium and American Airlines Center. That’s for both them and myself – as a huge Cowboys and Mavericks fan, it’s been painful cheering players on from my home with no chance of seeing them play in-person. Hopefully, when they come, I can take them to a Mavs game on Saturday and then a Cowboys game on Sunday. Secondly, I would take them to some of my favorite restaurants in the DFW area. As a Chinese-American, Chinese food is my favorite and I can’t go more than a few days without thinking of the rich and mouth-watering food of Sichuan Folk and Hunan Bistro. I would take my friend out to those two restaurants for lunch and dinner. I would definitely order their Sichuan Folk’s spicy boiled fish (also called Fei Teng Yu), as it’s one of the best things I’ve ever tasted. Third, I would take them to meet some of my friends and play some backyard football at my local park. Playing two-hand-touch football is one of my favorite pastimes, as not only does it let me exercise but also it creates a bond between me and my friends that I wouldn’t have found anywhere else. Whether it’s cheering on my teammate as he waltzes into the made-up endzone, or watching in dismay I get pick-6’d, playing football is both thrilling and rewarding. Finally, I would take them on a tour downtown. Dallas’ skyline is heavily underrated, and it seems every building has its unique architectural feature you won’t find in any other city. We’d start in Kylde Warren park, taking the architectural tour there while eating at some of the food trucks, and then make our way throughout the city either using DART or one of those electric scooters. 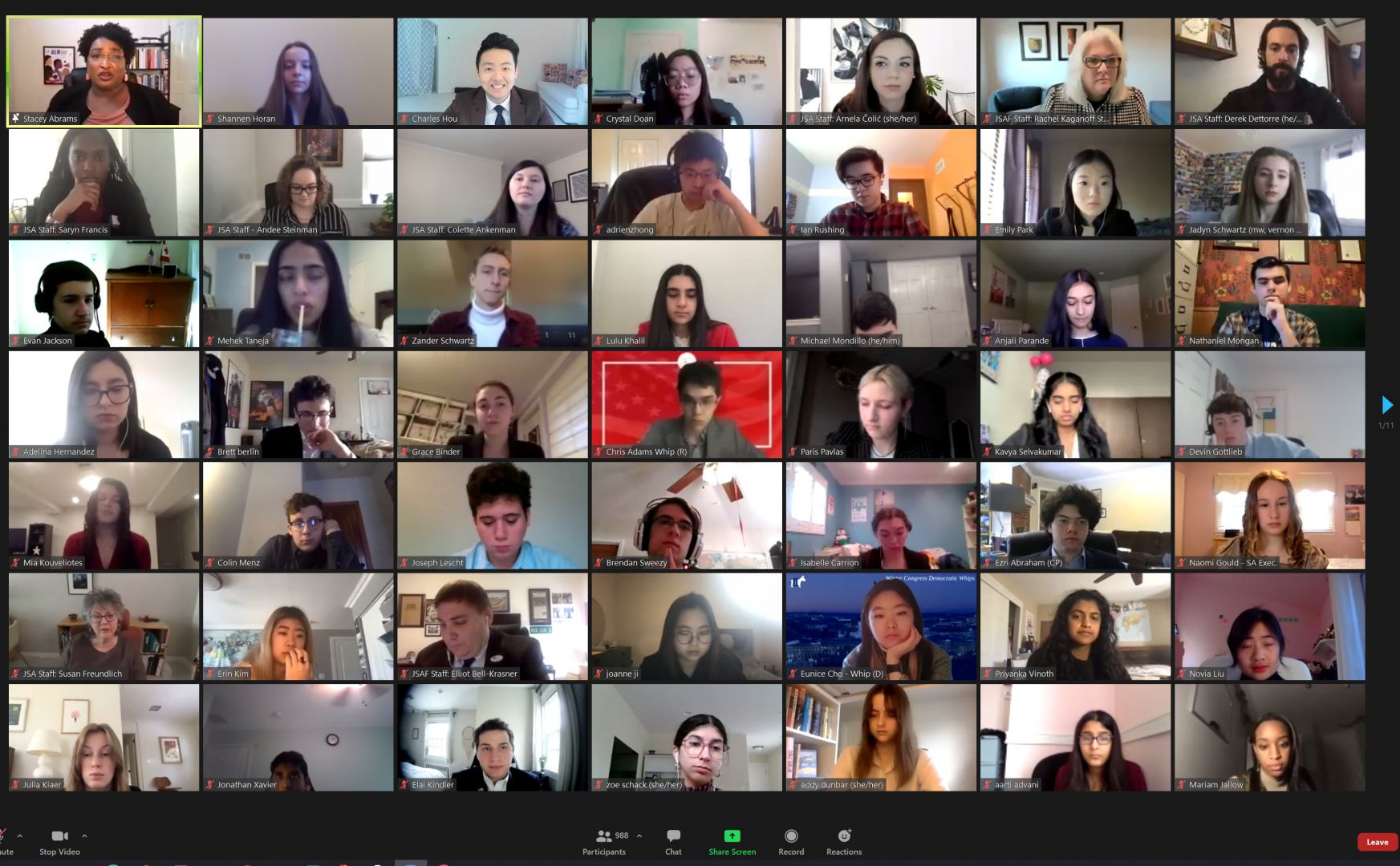 Shoutout is all about shouting out others who you feel deserve additional recognition and exposure. Who would you like to shoutout?
I would like to dedicate my shoutout to two other Directors of Debate, Novia Liu from the Pacific Northwest State and Yash Roy from the Mid-Atlantic State. Over the past few months, I have been coordinating national Winter and Spring Conventions for JSA, doing strenuous logistical and strategic planning. Over 400 people were in attendance at the Winter Convention, and we expect to see even more at the Spring Convention this April. Their help and guidance was instrumental in the success of the conventions, and made my job much easier to manage. The past few months have been tremendously busy for me, so their support allowed me to succeed to my fullest potential. 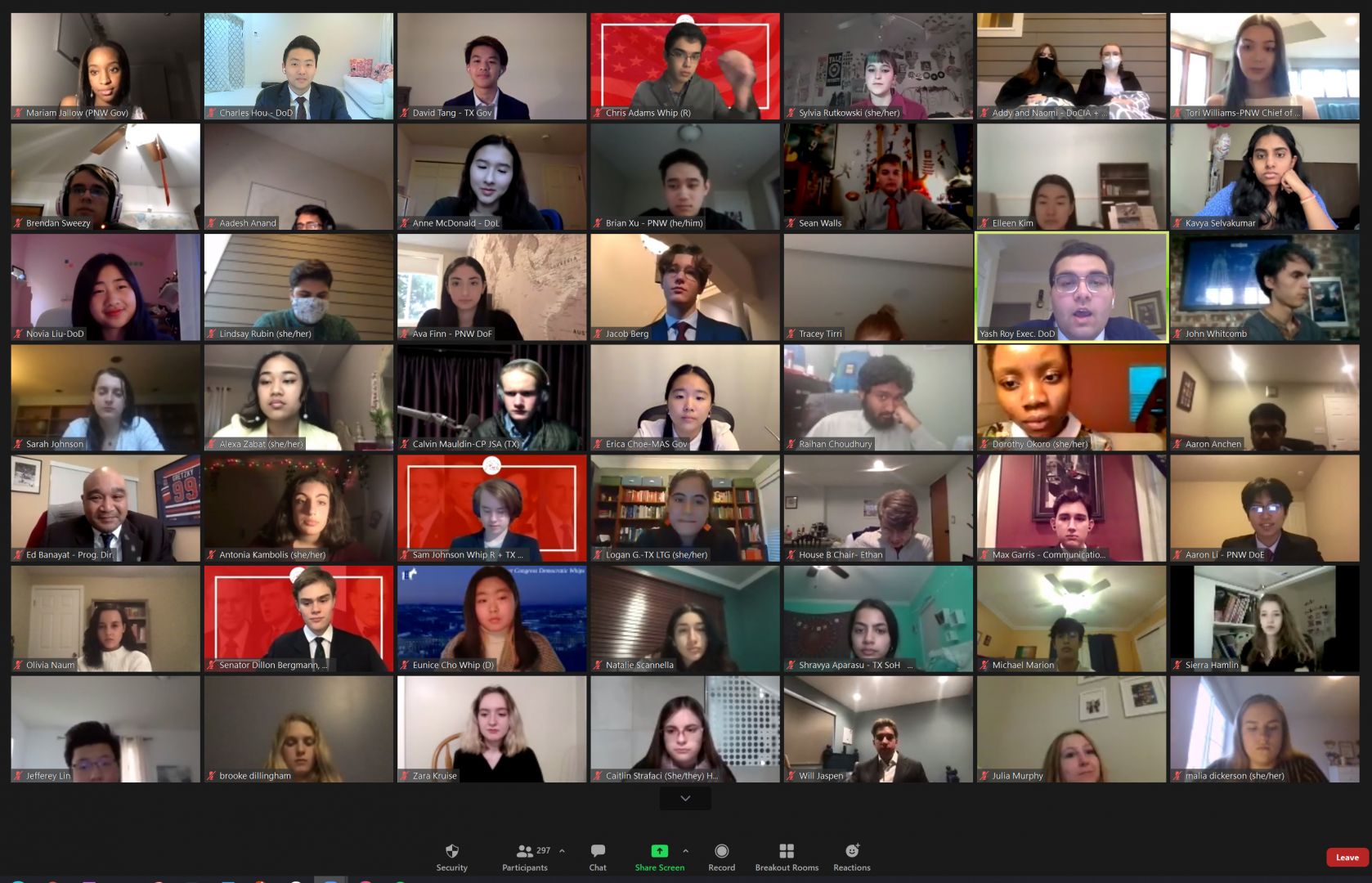